The amazing spell of weather continues in the UK. Records are being broken - the first time 20C/68F has been recorded in winter. Not quite that warm here but very pleasant riding weather. I'm out on the FJ again for a run to Galloway in the south west.

Getting the FJ out

We are currently enjoying a long spell of very mild weather - 14C/57F today. I tried firing up the FJ a few days ago…… and there was a feeble click from the starter motor relay. With a new battery fitted it started fine.

Today I took the old bus out for a run to the Borders.

In the News - Balmy Scotland


The UK is currently enjoying an unseasonably mild spell of weather thanks to a stream of air from the south.

I've been watching some YouTube reviews of the new Royal Enfield Interceptor 650 and am pleased that they have been generally favourable. 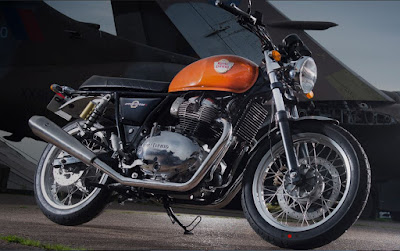 Firstly a bit of history. Royal Enfield were a British bike company that went bust in 1971. In 1955 the Indian government ordered a large number of Bullet 350cc singles for use by the police and army. This was beyond the capability of the company so they sold the design to a subsidiary, Enfield India, to be manufactured there. 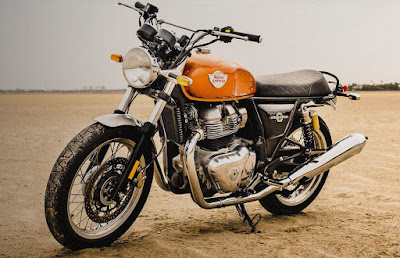 I first saw the Interceptor at the Scottish bike show in 2017. It was quite impressive being a neatly styled bike closely resembling a classic '60's Brit twin. With retro styled bikes very popular (Bonneville, Guzzi V7, CB1100, etc) it seems reasonable that Enfield would want a bigger bike to compete in this sector.

The Interceptor has a new 650cc air-cooled parallel twin with eight valves and a single overhead camshaft. The firing interval is 270 degrees so it had the feel of a V twin. Reviewers praise the smoothness of the engine (it has balance shafts), its grunty power delivery and the simple "back to basics" philosophy. I think the bike will be easy to maintain and repair and it will give plenty of scope for customisation. 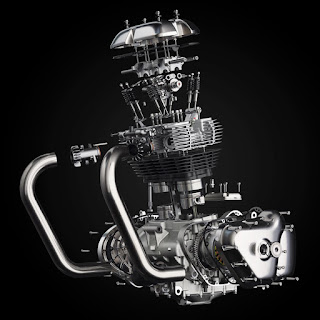 As well as the Interceptor Enfield have revived another name - Continental GT for a café racer version of the bike with a sporty seat and longer tank. 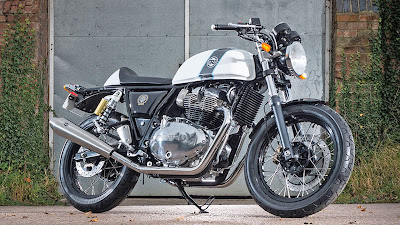 Please note that I started biking with Japanese two stokes in the mid-'70's and Royal Enfield were a mystery to me. I researched the history and it might not be completely accurate.

We had a little snow recently and today it was bright & sunny so I went for a short run locally and took some snaps. It was just above freezing so not too cold and the council had done a good job of keeping the roads free from ice & snow. My CBF250 is ideal for this time of year being very light & manageable. 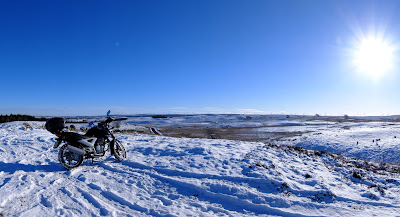