We hadn't seen "our" fox for a while but he was back today. When I last saw him couple of months ago he was not looking good. He had an injured back leg. It looked like he may have broken a bone in the lower leg/paw area and he wouldn't put any weight on it.

But today he was walking fine and as bold as ever. I think I could see some scars on his paw but he seems to have made a fully recovery. 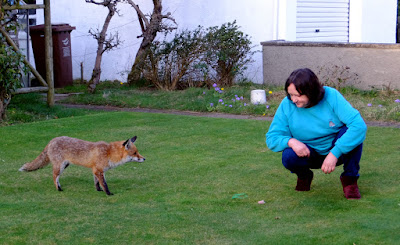 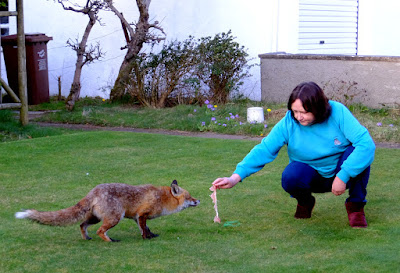 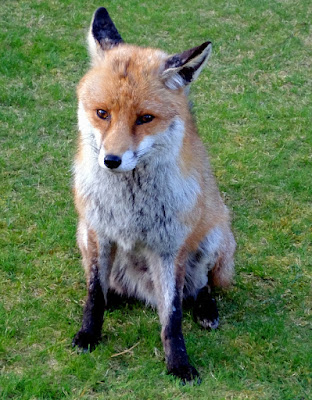 I took my father to the shops today to buy a couple of pairs of shoes. At 93 years old he's (perhaps wisely) given up driving. We went to the same shop he's been going to for decades and knows the owner and his family.

It's an old fashioned shop and I have an early memory of going there for shoes as a child in the mid '60's. I loved the shop because of a machine they had - a shoe fitting fluoroscope. This was an American invention but a version, the Pedoscope, was made in this country between the 1930's and mid '50's.

This was, believe it not, a self operated X-ray machine. It was a timber box with a space at the bottom for your feet and viewing screen on top where you could see the bones of your feet inside the shoes. It was a novelty device, a sales gimmick. You don't need an X-ray to know whether your shoes fit. 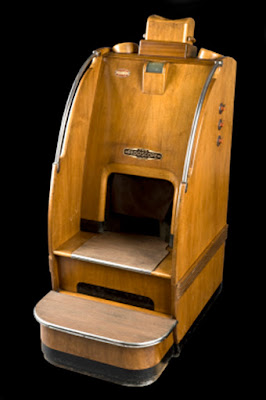 The label at the top reads "This machine fully conforms to Home Office safety requirements and in normal use is unconditionally guaranteed as safe". 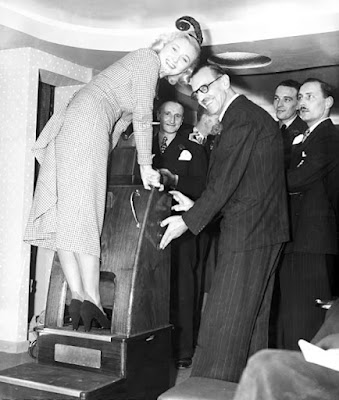 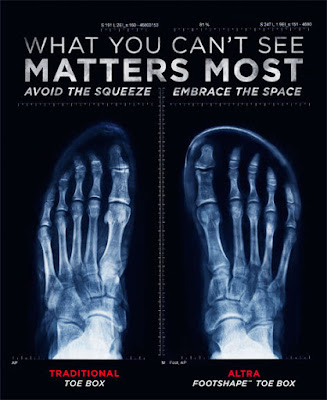 I guess that the X-ray source was a Crookes tube, a type of cathode ray tube that uses high voltages to produce high energy (ie very fast) electrons that produce X-rays when they hit the end of the tube. These rays pass through the foot and were made visible by a fluorescent screen.

My don't think my mother knew much about physics but she certainly didn't like us using the machine. And she was probably right. Allowing children (or anyone else) unlimited exposure to ionising radiation was a known cancer risk by the '50's. I guess the machines will have disappeared by the end of the '60's. 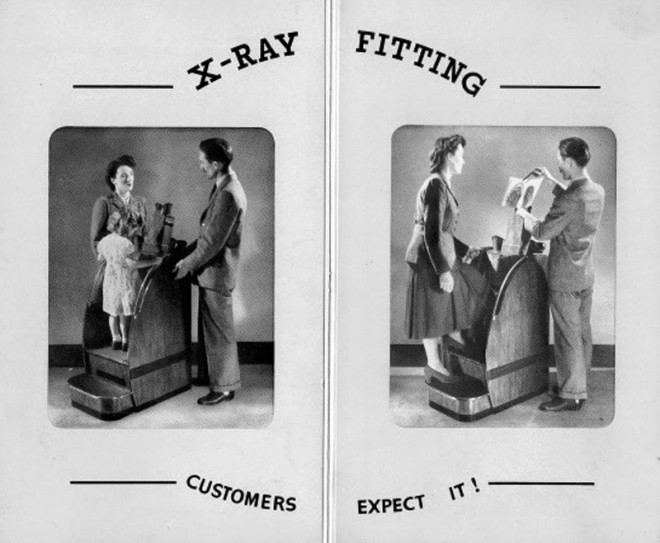 They were also not good for the shop staff. Although the X-rays were intended to be restricted to the machine but the shielding was suspect and the whole shop was likely flooded with X-rays.

I guessing that changing the fork oil is pretty low down on most owners maintenance list. Maybe I'm saying this because I'm a bit lax in this department. So this evening I changed the FJ's oil in anticipation of the coming riding season.

Actually looking at my workshop manual there is no specified interval to change the oil. I'm doing it anyway.

The fork oil provides damping and lubricates the bushings etc inside the forks. My experience is that the oil is always in a sorry state after any kind of use.


Like my other bikes I usually remove the forks to change the oil. But the FJ has drain screws that will make this task easier. The problem is low to catch the oil. When you remove the drain screws and pump the forks the oil will spray out with some force. 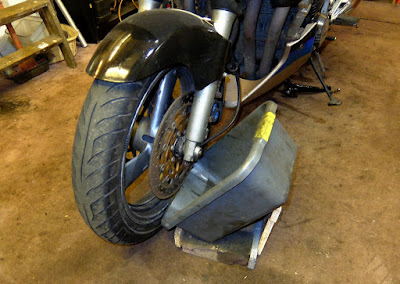 The world record for a motorcycle (in bits) was broken earlier this month at auction. A 1930 Brough Superior SS100 went under the hammer at the National Motorcycle Museum in Birmingham. It made £425,500 ($561,500) 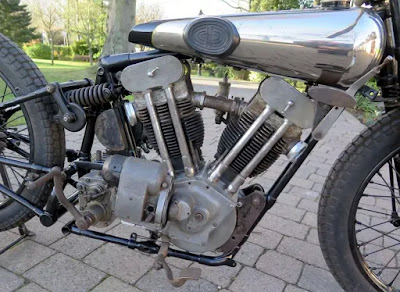 I'll finish my series of Bike Show posts with my favourite bike of the day. This is an amazing custom. A Honda Gold Wing adventure bike. You know a custom is good when it looks like it could have come from the factory.

Although a Gold Wing adventure bike seems an odd idea, surprisingly it doesn't look that big or bulky next to a BMW GS or a Triumph Explorer etc. 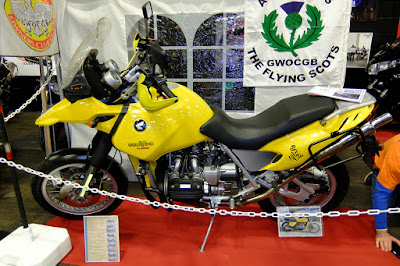 This tiny little thing is a BSA Dandy scooterette from 1956. It doesn't have the reputation of being Britain's finest and contains some strange, if not bizarre, design features.


The bike was powered (and I use that word in its loosest sense) by a 70cc two stroke engine with a two speed gearbox. The gearchange was a preselector. You changed gear by rotating the left grip but the change only occurred when the clutch was operated.

Being an early example starting was by a hand lever. I don't have a photo but this rested in an awkward location on the left footrest.

But the biggie was the location of the ignition points. They were located deep inside the engine and require the motor to be removed and split for access. Not a great idea on an item requiring regular maintenance. 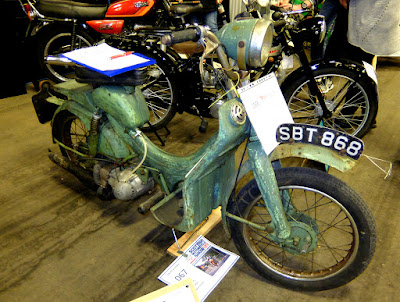 I snapped this rare Honda at the show. 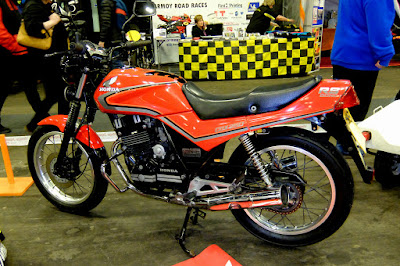 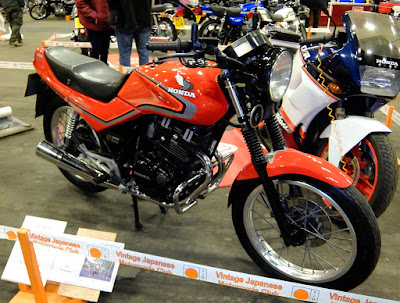 The CBX was the replacement for the CB250RS which I owned. (see here) The main difference was that the engine had twin cams…. 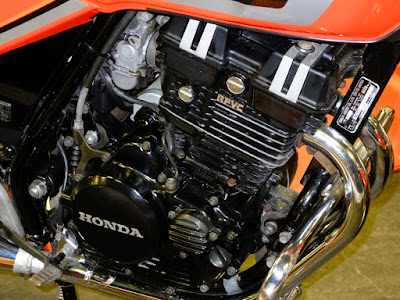 …..and RFVC - radial four valve combustion. In this the valves were arranged radially rather that the more usual pairs of parallel valves. This was a more hemispherical arrangement and was also used in the XR enduro bikes of the period. 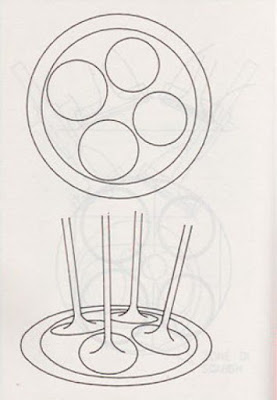 Today I went to the Scottish Bike Show at Ingliston (near Edinburgh) Thanks to Ron for giving me a lift in his car. It was variously wet, cold and very windy so biking there would have been no fun.

There were some interesting, rare and quirky bikes on show. I'll present them in a series of short posts.
Firstly a Suzuki X7 250cc two stroke twin with something odd attached to it.


In 1983 the law in the UK changed to reduce the size of motorcycle a learner could ride from 250cc to 125cc (a learner being someone who had not passed their motorcycle test) If the bike had a sidecar attached no capacity limit existed. This led to the Sidewinder that exploited this loophole.

The Sidewinder was a minimal sidecar - just a small platform with a wheel attached that banked with the bike. It was marketed for learners with 250cc bike that they could not ride after the law changed. A learner could also ride a bike of any capacity with the Sidewinder fitted. 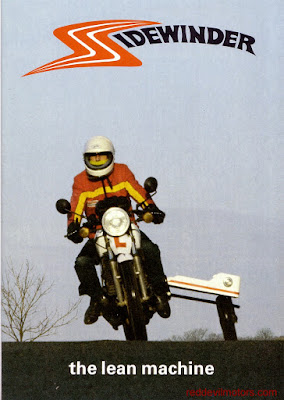 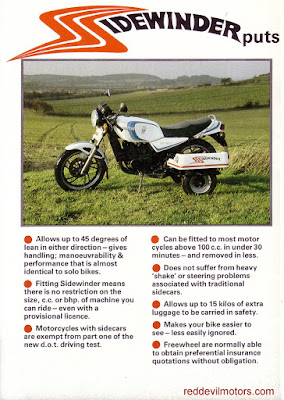 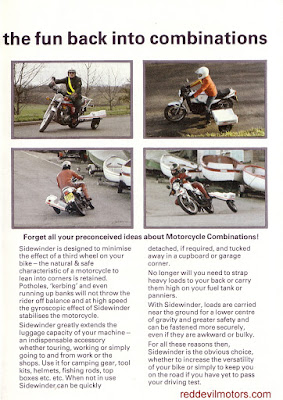 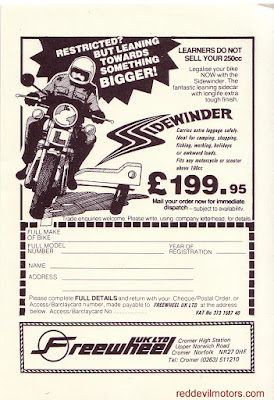