On a recent visit to the city centre my Honda CBF250 failed to start. The instrument lights came on but the starter remained silent. I enlisted the help of a passer-by to give me a push. The CBF bumped started easily so I got home ok. Back home the starter would work occasionally. There was power getting to the motor so I had a good idea what was wrong.

The first thing to check on a DC motor is the brushes. These are made of carbon and wear down with time. One of the two brushes was well below the service limit so replacement was necessary.

After market brushes are available but I didn't fancy trying to connected them up. The starter draws a lot of current and I'm not sure my soldering would have took it. I bought an original Honda set that come with the brushes connected to the plate and terminal.

An Autumn Scene (and a Quirky Story)


At this time of year I usually present you with some photographs of autumn foliage. I haven't got many this year. To capture the colours of the leaves you need some sunshine and this has been in short supply recently. I took this snap in the Clyde Valley recently but wasn't going to post it until I read the story of the location.

Beyond it once stood Milton-Lockhart House, built in 1839. This is where the story gets strange. In 1987 Japanese actor/director, Masahiko Tsugawa happened to be passing the house, by this time derelict. He arranged to buy the property and have it transported to and re-erected in Japan. Its journey east was partly by the Trans Siberian railway, permission being granted by President Mikhail Gorbachev.

The house is now the centre of a medieval village and home to the World Santa museum.


http://www.jrs-w.com/lock-heart/english/index.html
Posted by fj_stuart at 06:11 3 comments:


Yamaha have shown this wacky bike. Or rather trike. It's a tilting three wheeler based on the MT-09 (FZ-09). I'm struggling to see the point in it but it will be interesting to read reviews of the machine. 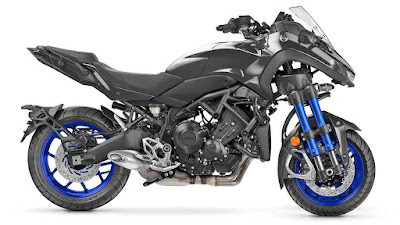 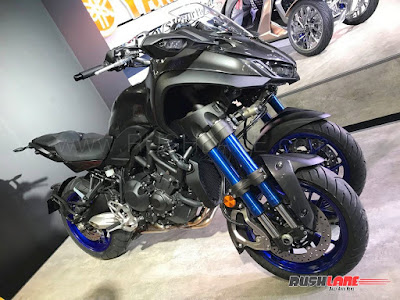 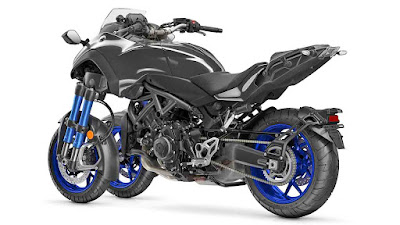 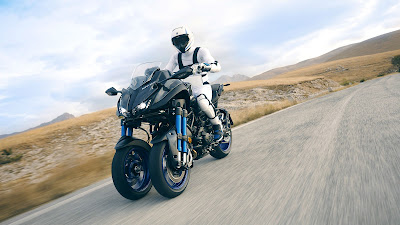 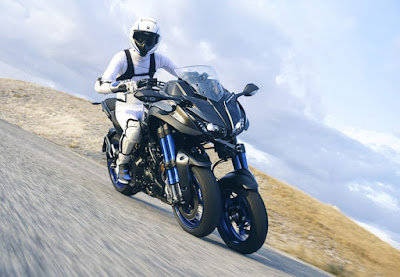 
Rawtenstall is a town north of Manchester that is known for its cotton mills, now long quiet. In the past it was also known for its annual bike show. So 17 years ago I thought why not go, it's only a 430 mile round trip.

The show, the Rossendale Valley Motorbike Show, isn't really a show, as far as I could see, just a lot of bikers meeting in the town centre. The weatherman had promised fine weather and so it was. At first. I had a pleasant run down in sunny and warm condition but as the day progressed it got cloudy and then the rain started.

I took refuge in a pub that had a rock band playing but eventually I thought I'd better head for home. By this time the sky was as black as night and the rain was torrential. I should have found a hotel and forgot about work the next day but I ploughed on. I remember the water was so deep on the motorway that the FJ created a bow wave like a ship.

I can't remember why I stopped on the motorway. You're not suppose to without good reason. The bike was running fine and I had all my waterproofs on, maybe I just couldn't see were I was going.

I made it home, soaked to the skin. The funny thing was that my legs were dyed back from the colour washing out of my leather trousers.

The bike show ended after 15 years in 2010 (I think) because it was becoming too popular and the police said they had insufficient resourced for such a big event.

An interesting day out but I still shudder a little when I hear the name of the town!
Posted by fj_stuart at 12:42 3 comments:

The Water of Urr

I went on a run yesterday to this (fairly obscure) river in Dumfriesshire. It's not very big or picturesque but, as is often the case, it's what I found on the run that's interesting.

The village is the location for the World Flounder Tramping Championships. See here for the grisly details https://en.wikipedia.org/wiki/Flounder_tramping