Having four bikes (3 runners, 1 donor) means that some don't get used for long periods and I like to keep their batteries charged. A lead acid battery will self-discharge and I've had a flat battery freeze. (although it's rarely that cold here)

I use an old battery charger or a cheap battery tender that can be permanently attached. These don't give much indication of what is going on charging-wise. I can check the voltage being applied across the battery and the current flowing into it using a multimeter. But it's awkward doing this and it's easy to blow up cheapo meters by shorting them out across the battery on the current setting.

I thought that it would be good to have a device to measure voltage & current between the charger and the battery. A quick look on eBay found that such a device was available at a low price.

Now I'll say right here I not good with electronics. They are a bit of a mystery to me so I might start talking a load of rubbish.

The digital voltmeters/ammeters come in different ranges but I got a 100V/10A model. 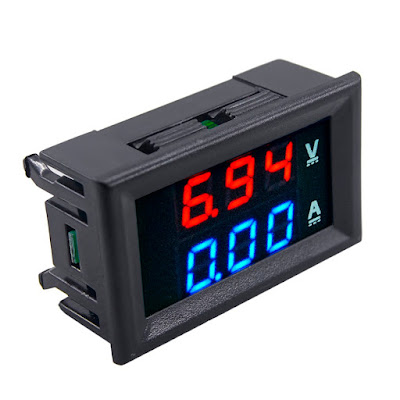 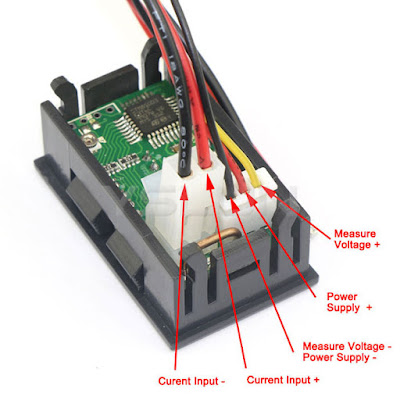 A Short Run to Fife


It was a wet morning here today but it dried up later and the weatherman promised 12C/54F which is pretty much spring here. I headed to Fife on my CBF250, it was a short run but there was plenty to see. 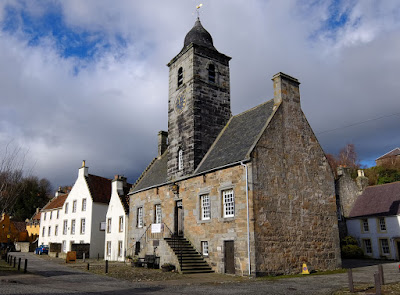 Today was sunny so I went for a run. It's still cool (7C/45F) but wrapped up well and with heated grips set to "high" it was quite pleasant. I went down to Dumfries and stopped at the Devil's Beef Tub on the way home. This is a hollow formed by hills at the end of a valley. The name comes from its use by the Johnstones, a local clan, to hide stolen cattle.

Panoramas of the Beef Tub

I saw this rare and unusual version of the sohc Honda 750 advertised locally on Gumtree. The "A" stands for automatic. This was a short-lived model fitted with automatic transmission. Well, semi-automatic transmission. It had no clutch but its two gears had to be selected manually. Drive was via a torque converter (like an automatic car) This fluid coupling meant that only two gears were required. 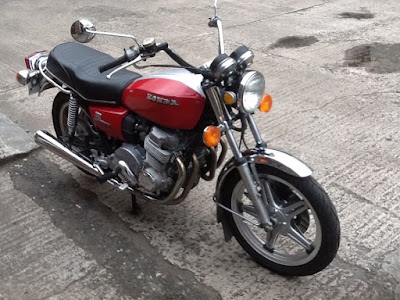 The bike was on sale for £2,000 which seems reasonable given that it looks in good condition and that CB750s of this era are becoming collectable. I don't think this model was ever sold in the UK. Probably a US import.
Posted by fj_stuart at 08:48 No comments:

....or eBay saves the day again.....or be careful in your purchases.

I took my CBF250 for its MOT (UK annual safety check) at the start of the year. It passed but Barry, the tester, said that I needed a new front disc. I admit to being a bit incautious with discs. So long as they aren’t warped and they stop the bike I'm happy. But on this occasion he had a point. The disc had severe wear. It gets a hard time because the bike is used in winter so exposed to dirt & grit etc.

Bike discs are pricey (£142 for a genuine Honda item or half that for a pattern part) but given the bike is in the autumn of its years I took a chance on a used part from eBay. Parts for the CBF250 are rare but luckily it shares parts with more common bikes. In case of the disc the CBR125 uses the same one. 125cc bikes are common in the UK because they can be ridden by learners, ie those who have not passed the test. Learners crash a lot hence plenty of parts.

I searched eBay and found a nice one for only £17. It arrived and it was indeed in good condition. I set about fitting it but hit a problem Although looking similar it had six mounting holes rather than the CBF's five. Damn! seems that different models of the CBR125 used different discs.

Back to eBay and I found a five hole disc, again in good condition, for a mere £12. 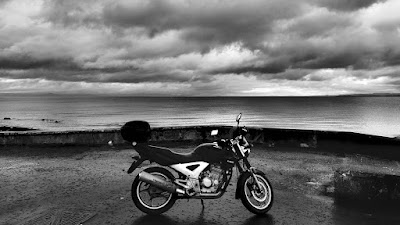