Making friends down on the farm

As I've mentioned previously I'm spending time tending to an injured horse deep in the countryside (actually about a mile outside the 'burbs) During my time I've been studying the various creatures on the farm. The cows are generally uninteresting but this little guy has a bit of character. Uniquely amongst his kind he has worked out how to get through the fences and spends his time wandering about the place. He also has strange facial markings like someone poured a tin of paint over him. And he looks you straight in the eye. 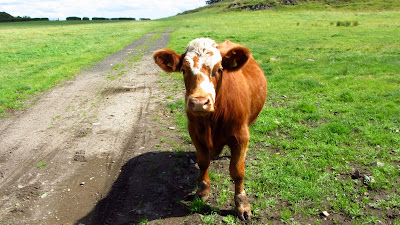