Rewind to 1977. My Yamaha RD350 had been stolen and I got the Suzuki TS100 to keep me moving. I then bought the Suzuki GT500. It was only six months old when I bought it so it is the newest bike I've never owned. The GT was a two stroke twin and an update of the '60s T500 (Cobra/Titan in the USA) with a disc brake & electronic ignition. They were cheap, offered a reasonable amount of performance and were reliable and durable. The GT was the first bike I owned that had serious touring ability. I toured Britain, Ireland and Europe in the seven years I had two of these bikes getting as far as the South of France. The engine was in relatively low state of tune and had good torque for a 2-stroke.
The bike had electronic ignition when this was rare on bikes. One winter this must have gone wrong and the bike wouldn't start. I eventually bumped it into life but it was running rough. I selected first, dropped the clutch and the bike shot backwards! It is possible for a two stroke engine to run the wrong way. 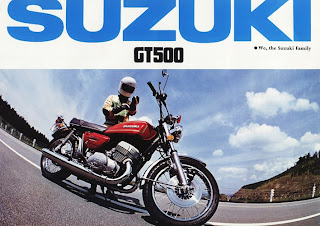