I saw lots of these little trikes on the Greek island of Mykonos last week. They are a tilting three wheeler that hinge behind the rider to allow it to bank over while the rear wheels stay on the ground. They have a goods platform at the rear and are used for deliveries to shops & restaurants in Mykonos town which has a warren of very narrow streets. Unusually for a Honda it has a two stroke engine. 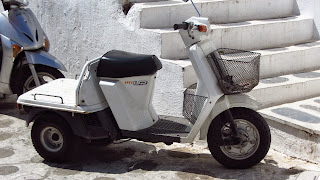 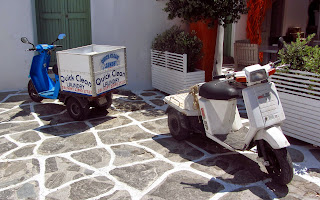 Several models of the Gyro have been made starting in 1982 and is still going today. It's mostly Japan market only and I've never seen one anywhere else so it's a mystery how so many got to Mykonos.

The Gyro is not a unique concept, of course. It was patented by an English engineering company G.L.Wallis & Son and sold by BSA as the Ariel 3 in 1970. It was not a success and proved to be a nail in the coffin of BSA. The design was later licensed to Honda.