I Have Heard the Word of God

I went for my weekly Italian lunch with an old work colleague this afternoon. As is usual we went for an after lunch stroll. Today it was across the River Clyde on the South Portland Street Suspension Bridge.


Halfway across something odd happened. We could heard a voice. It was religious in nature - "follow Jesus….the word of God…etc, etc". There was no obvious source for the voice. "Can you hear that?" said Henry - "Hear what?" I replied to give him the impression that it was all in his head. After a bit of searching we found a loudspeaker attached to the outside of the bridge with cabling to it.

At this point I'll point out that my colleague is the Bridge Manager for the city but he had no idea why the speaker was there. We followed the cables back to some distribution boxes. One cable will be the signal and the other power for the amplifier in the active speaker (I guess).

My friend called me later to say that no one in the office had any idea why the speaker was there either but someone managed to install it and connect into a power supply and get a signal to it - very strange.

My friend also said that the bridge had been the site of a number of suicide attempts - some successful. Maybe the voices had something to do with this. 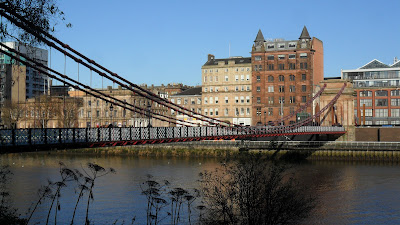