If you are going to run a bike through a Scottish winter then stripping & cleaning brake calipers becomes a routine task. The CBF's front brake was becoming a bit "notchy" so I thought nothing of taking it apart. But when I put it back together there was something amiss. It felt wrong and was dragging badly. Inspection found that the dust seal on one piston was poking out. It turned out that a small chip has come off the caliper body at the seal groove. 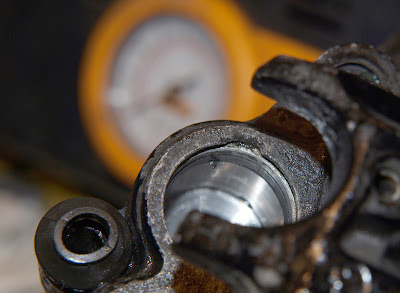 I put the caliper back without the dust seal which should work for now (hard to test due to snow & ice on the roads) but I'll need a new caliper. The CBF is fairly rare so there aren't too many parts about. I checked the excellent EBC catalogue and this allowed me to cross reference the CBF's pads with others that use the same pads and thus possibly the same caliper - Honda 125 Varadeo & Kawasaki 125 Eliminator are candidates amongst others. I should find one on eBay.
Posted by fj_stuart at 08:51