On my travels recently near the Lanarkshire village of Douglas Water I came upon an example of a true British design classic - the Bailey Bridge. They were designed during World War two by civil engineer Donald Bailey and were extensively used by army engineering units of Britain, Canada & the USA. Field Marshal Montgomery & General Eisenhower both credited the Bailey bridge with helping to win the war. In civilian use they are still manufactured and used in road construction. 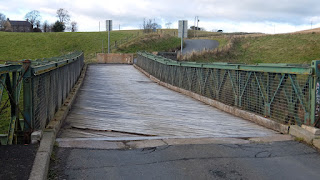 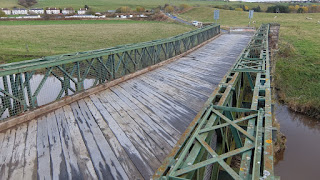 These bridges are made from pre-fabricated modular steel panels. They can be assembled in many ways to provide temporary bridging strong enough to carry a 40 ton tank. They can transported by light trucks, assembled easily and erected without the use of heavy equipment. 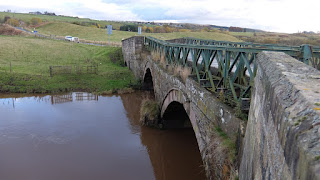 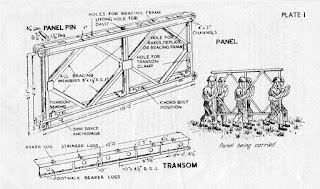 This bridge is an old two span masonry arch that must have started to collapse. The Bailey bridge was erected on top. The road is closed to traffic (but not a bike, of course) due to an obvious sag. This is not the fault of the Bailey bridge but due to deterioration of the support at the pier (I think) 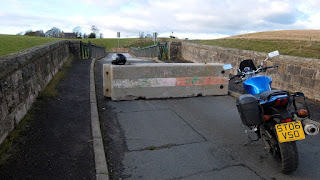 During the war over 490,000 tons of Bailey bridge was manufactured, representing 240 miles of bridge.
Posted by fj_stuart at 02:48