My Honda CBF250 has been going very well but a few weeks ago that changed.


On a visit to my local Aldi supermarket for some essentials (a cordless drill & a six pack of Stella Artois) the bike suddenly started making a knocking noise and vibration increased. I made it home but realised that something serious was wrong. 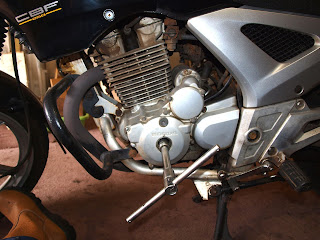 
The tensioner has a spiral spring (like a clock) that pushes a plunger against a blade. I stripped the tensioner and found that the end of the spring had snapped off. Slack in the chain had allowed the cam timing to go out. When the engine is running the valves go in and out and the piston goes up and down. They use the same space but at different times. When the timing when out they hit each other hence the noise and vibration.

I removed the cylinder head to establish the damage. The two inlet valves were bent. Luckily everything else seemed ok.


I wasn't unhappy about the failure. The CBF has done a lot of miles for a 250 (65,000 miles) and works hard. But I have to make a hard-headed decision. The bike isn't worth much so it's not worth spending too much on it. It looked like a pair of valves and a head gasket would do it so a repair seems worthwhile.

The CBF is quite a simple engine and access is good so it's not hard to strip down.