A short while ago my CBF250's clutch started slipping. Going uphill in high gear the revs would rise but the speed didn't. This was surprising. Although the little bike has done a fair amount of miles, bike clutches don't generally wear out. Especially since the CBF has modest power and low gearing so doesn't give the clutch a hard time.

I fitted a tube over the end of the cable, filled it with solvent and blew it through the cable with an air gun attached to my compressor. I then blew some chain lube through it.

Success! the clutch no longer slips. Seems that the resistance in the cable was enough to cause slippage. 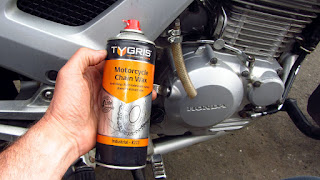