I took a trip down memory lane when I found this old Suzuki GT500 in Saltire Motorcycles in Edinburgh today. I had two of them between 1977 and 1985. This was the bike that got me into touring. I think this is a GT500M from 1975. 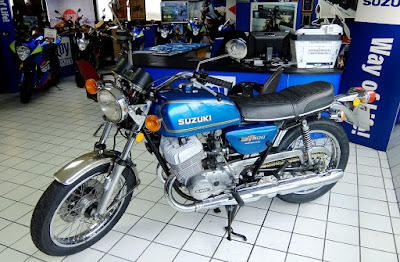 The bike started out as the T500 way back in 1968. The T became the GT in 1975 with the addition of a front disc brake and electronic ignition. At the time it joined the GT380/550/750 triples in Suzuki's range. The GT only lasted until 1977 when Suzuki dropped their big two strokes in favour of the GS series.

The bike had a 500cc two stroke twin cylinder engine producing 44 bhp. It offered a reasonable amount of performance at a good price and its simple mechanicals were easy to maintain & repair. The bike was big enough to carry two people and their luggage and had enough power (just) to cover serious miles.

I toured the UK, Ireland and Europe on the bike, getting as far as the south of France. It was a willing slogger and never gave me any problems over many thousands of miles.

There were a few memorable moments along the way. It was stolen in Dublin. We had to return by train. I remember that at the ferry terminal the man gave me some money back because I was returning without my bike - not something I suspect they'd do now. No sooner was I home that I got a call saying my bike had been recovered. I didn't know if it was rideable so I returned to Ireland with a bag full of tools spare parts, wire and tape. This was during  "The Troubles" and I was carrying what looked like a bomb making kit. I had to walk across Belfast between railway stations and through security checkpoints explaining myself along the way. The bike turned out to be ok except that they'd managed to flood the engine with fuel. I cleaned the plugs and with a push from some helpful Gardai (police) I managed to bump start it. 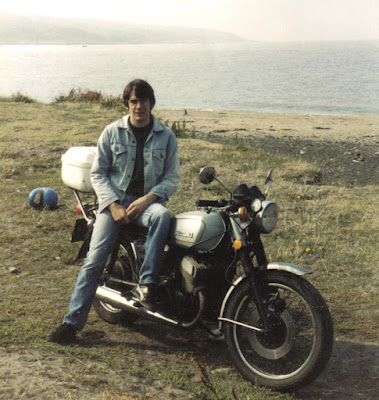 During one tour in Germany the bike started to "pink" when the throttle was opened. In a campsite (Aachen, maybe) I removed a cylinder head to find a pea sized lump of carbon on the piston crown. This was heating up and causing pre-ignition. Because it's a two stroke this was a simple task involving just the removal of a few bolts.